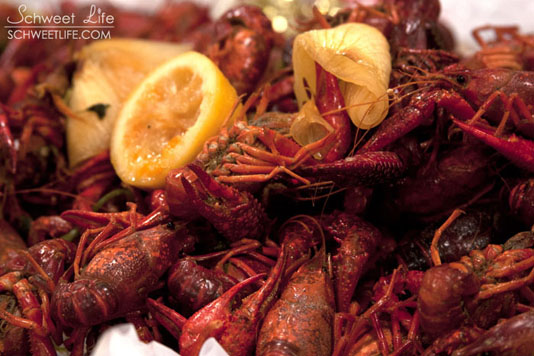 I’ve dreamed of visiting New Orleans since discovering Emeril Lagasse in junior high school. I’m not a big fan of regular fish but I love shellfish and given the various dishes featuring crawfish, crab, and shrimp New Orleans has always seemed like it would be culinary heaven for me. I’ve made really great crab legs, my mom makes a mean stewed or curried crab, and I had delicious crab in Washington DC. Excluding the breaded nonsense of some restaurants, I can’t think of a time when I had bad shrimp. However, on the few occasions that I’d had crawfish it was really blah and disappointing. I figured that I would have to wait until I visited New Orleans to get some really good crawfish.

One day in early May I saw that Kitchen Surfing was organizing a mid-week Crab Boil for the Kitchen Surfing Meetup Group that would be prepared by Nick Suarez and Theo Peck of The Food Experiments National Tour. It was only $15 for a bunch of crawfish and sides so I decided to give it a shot and signed up to attend the event.

I arrived a bit before the start time so I could get some photos of the cooking process. About an hour later, the other attendees had arrived and it was time to dig in. I could tell just from the strong smell of spices that this crawfish would be different from any that I might have had before. The crawfish was nice and tender and a mixture of sweet and savory. The sides were simply corn, mushrooms, and potatoes boiled in the same kind of flavored liquid as the crawfish but they were soooo good. To give you an idea of how good everything was: celery is typically about as flavorful as Wonder Bread but boiled with the other stuff it was good enough to be eaten on its own. Yes, celery.