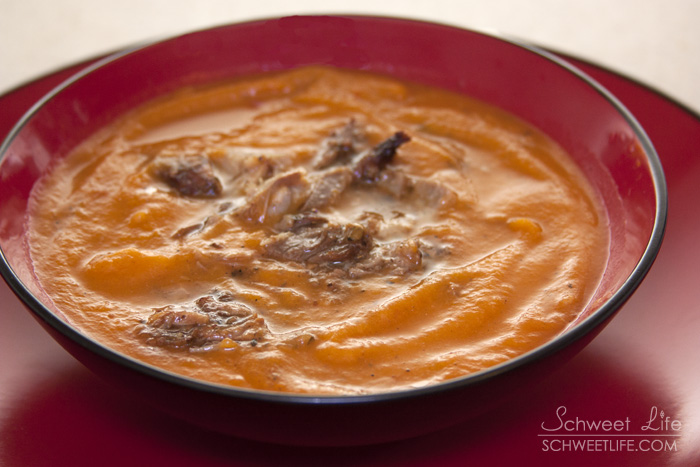 I know the title of this recipe is “Sweet Potato Soup” but to be honest, I kind of want to call it a “bisque”. Now I’ve never had bisque (of any kind) but as I was making this soup it felt kind of bisque-y. It’s comprised of a few simple ingredients but it’s so rich and filling that it doesn’t quite fit my idea of soup. However, traditionally the term “bisque” refers to a soup that is thick, creamy, and typically made with a shellfish based stock. Thus, for posterity it will be called a soup but in my mind I’ll refer to it as “Sweet Potato Bisque”. Now that we’ve got that out of the way, on to the recipe!

Heat the soup over a medium flame until the first bubbles begin to appear. Taste the soup at this point and adjust the seasoning if needed. Lower the flame and allow the soup to simmer until it is properly warmed through. Serve hot in soup bowls and optionally garnish with roasted meat.

The soup can easily be made vegetarian by omitting the meat garnish and using vegetable stock instead of beef or chicken.