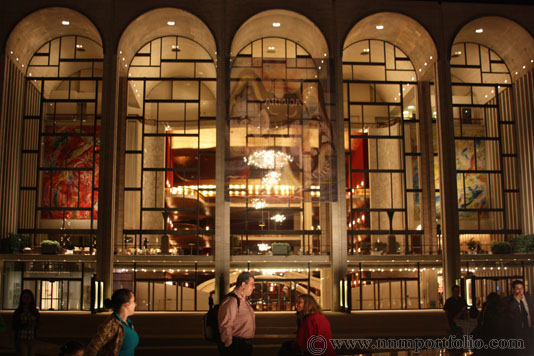 New York City is an environment of pulsating activity which makes it a great place to photograph during daylight hours. And while it’s true that the city never sleeps, it does have a different feeling at night. The frantic hustle and bustle of the day gives way to suave and cool when the sun goes down.

In the spring of 2010, I attended an event at the Empire Hotel Rooftop Bar with a friend and brought along my camera to snap a few photos. After leaving the event, we noticed that Lincoln Center was lit up and the fountain was on so we stopped by to take a look.

I visited Lincoln Center on school trips in junior high school and later walked by a countless number of times while attending college a few blocks away so I’d seen the concert halls by day but didn’t full appreciate their beauty until I viewed them at night. The buildings are bathed in a warm yellow glow that welcomes and encourages you to climb the short steps and see familiar surroundings from a new perspective.