Your Money and Your Man by Michelle Singletary 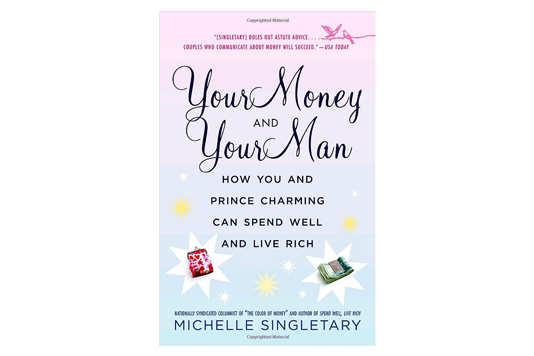 I’d consider myself to be financially literate on a basic to intermediate level as a result of having read several books, magazines, and websites about personal finance. I don’t have any credit issues and I’m decades away from retirement but I have a good handle on the basics of budgeting, saving, and retirement. I’ve been looking for books that offer more advanced financial advice specifically for what adults in their 20’s-30’s should be doing to ensure a financially secure future. However, a problem that I’ve been running into is that a lot of personal finance info focuses on the basics, credit repair, or retirement and are primarily geared towards older folks. I visited the library to browse the personal finance shelves and came across Your Money and Your Man. In Your Money and Your Man, financial writer and television show host Michelle Singletary offers women financial advice for dating / courtship, marriage, and raising kids.

The first section of the book focuses on dating/courtship. It offers a lot of sound advice about the importance of women being financially responsible and independent prior to getting married. What I found particularly useful was the breakdown of home ownership as a means to building wealth. Singletary not only offered step-by-step instructions for preparing to buy a house but also explanations of the different types of mortgages along with their respective pros and cons.

I also found exactly what I was looking for in the “Major Money Milestones” chapter which provided guidelines on financial goals you should strive to achieve broken down by age. It wasn’t as detailed as I would have liked it to be but it was still valuable. I had almost no prior understanding of the different types of life insurance so the “Getting Down To The Basics” chapter was very informative for me. I liked the breakdowns in each chapter that explained how to execute the advice offered along with detailed explanations of options. I also thought the Financial Communication Checklist was a great resource.

Generally speaking, I think men and women should both pay for dates, either splitting the bill or taking turns paying. I don’t think men should be expected to do all the romancing nor should they have to profess their love through the amount they’re willing to spend on pricey gifts. I don’t believe in unmarried couples living together unless they’re already engaged with a set wedding date in the near future. It’s not that I’m concerned with traditional values as much as I don’t think it’s a good idea to mix finances or tie yourself to someone that you haven’t made plans to be with on a permanent basis.

I’ll admit that I’m frugal and probably lacking in the romance department but I think for the most part expensive engagement rings and weddings are a waste of money for the average couple. I don’t have an issue with engagement parties, weddings, or baby showers but a lot of them seem to be focused less on the celebration of a major life event and more on getting people to buy the couple stuff which is tacky. As a result, I agreed with most of Singletary’s views on dating and weddings.

I did side-eye the idea of two people with very different spending patterns even entertaining the idea of getting married. Love doesn’t conquer all and two people with fundamentally different views on finances thinking that they’ll balance each other out is a gamble. Finances can be a major issue during marriage and is one of the most common reasons for divorce. Any discrepancies in financial beliefs need to be completely worked out during the engagement and those people need to go their own way if they can’t be resolved. Like any other habit, if a person doesn’t decide to change or moderate a habit on their own, the change isn’t likely to be permanent. Singletary didn’t advocate for people getting married under these circumstances but seemed unwilling to state outright that such a couple doesn’t have any business being together.

Where I disagreed with Singletary was on the points of prenuptial agreements, joint bank accounts, and one of her examples of compromise.

Singletary agrees with the opinion that pre-nuptial agreements are a sign that a couple doesn’t love or trust each other enough and that those marriages are doomed to fail. But based on that logic, why advocate for couples exchanging credit reports before getting married? If love means that you join all assets with no consideration for how to divide things in the event of divorce, why not be just as willing to take a potential spouse at their word and take on whatever debt they might have and believe that love will allow you to overcome any and all obstacles?

Singletary states that only 1% of married or engaged couples have a prenuptial agreement. Yet it’s estimated that about 50% of marriages end in divorce. Given the discrepancy in percentages, the belief that prenuptial agreements are a “plan to fail” is pure opinion with seemingly no basis in fact or at least no supporting facts were presented. It’s illogical to encourage women to be responsible, delay gratification, and sacrifice to achieve financial independence but to then advise against protecting the assets accumulated from that hard work. By all means, assets accumulated during marriage should be split fairly. However, assets accumulated prior to marriage should remain with the person that accumulated them. I came to the book with that belief and the info presented by Singletary did nothing to change my mind.

I’ve heard and read horror stories about previously “in love” couples being dishonest about finances during marriage and/or becoming vindictive during divorce. It’s unfortunate but in some situations, the person you fall in love and are in a relationship with can be quite different from the person you break up with or divorce. I view a fair prenuptial agreement as nothing more than an agreement on how assets would be divided in the event of divorce. If you view it from that perspective, it’s no different than drawing up a will or purchasing insurance. We all hope that we’re not going to die early, be permanently disabled, or suffer a serious injury / illness but it’s agreed that it’s responsible to plan accordingly in the event one of those things should happen. You hope for the best but prepare for the worst so I don’t think planning for the off-chance possibility of divorce should be any more jarring than planning for any of the other life events we hope won’t happen. A pre-nuptial agreement also isn’t very different from the open communication plan that Singletary promotes elsewhere in the open.

I understand Singletary’s perspective on joint finances and that money should be regarded as “ours” rather than “yours” and “mine”. However, I don’t think there’s anything wrong with a couple having joint or separate accounts. Couples should just choose what works best for them. The “Financial House Rules” are a great idea for avoiding financial disagreements by having a couple put in place an actual plan for how they’ll communicate to ensure openness and honesty.

I agreed with Singletary’s statement that relationships require compromise but not her idea of compromise as explained in one of the examples that was provided. She shared the story of a woman who contacted her for advice. The woman and her fiancé both owned their own homes and each had their own reasons for not wanting to move into the other’s home. The obvious common sense solution would be for both of them to sell their homes and use the proceeds to buy a new home together that would fit both of their needs.

Yet it seemed that Singletary advised the woman to compromise and sell with no mention of the fiancé compromising. She focused on the woman being unwilling to compromise rather than them both being unnecessarily stubborn. The idea that the woman should just give in and sell her house because it’s easier than trying to find another man to love / marry her is terrible advice on a financial and social level. It’s unreasonable and unfair in that example for the woman to be the one to automatically give in because it’s not really a compromise.

Singletary’s writing style is relaxed and folksy which actually made the book engaging. Your Money and Your Man is a bit basic but I was still able to learn some new things. The book is primarily geared towards women but the advice is also applicable to men. Most of the advice offered is grounded in facts and statistics are provided to back up claims. While some of the advice is based on Singletary’s personal beliefs, some of them made me revisit my beliefs and it was easy enough to ignore the others. The advice offered won’t apply to everyone but it’s helpful to know what the different options are and how to select the one’s that’s right for you.