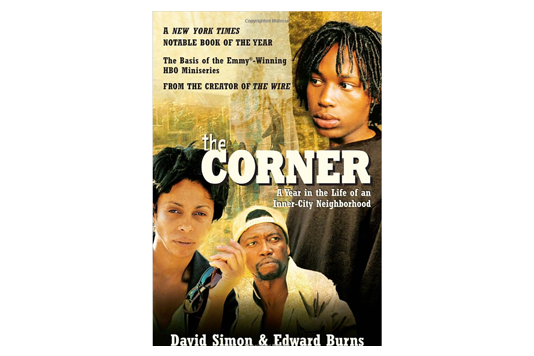 Click the image above or the link to purchase The Corner: A Year in the Life of an Inner-City Neighborhood

One of the most frustratingly saddening and equally inspiring books I’ve ever read is “The Corner” by David Simon and Edward Burns. The non-fiction book follows the lives of residents near the corner of West Fayette and Monroe Streets in West Baltimore over the course of a year in the early 90’s. The authors lay bare how a history of poverty, crime, and drug addiction has torn apart the neighborhood, families, and individuals. I finished reading the book in the summer of 2014 but needed some time to figure out how I felt about the book and to put those ideas into words.

At the center of the story is DeAndre McCullough, a teenage boy who has played around at dealing drugs. Approaching adulthood he is faced with the looming choice of getting his act together or heading down a path that is common in his neighborhood but rife with unhappiness if not destruction. The other main subjects are his parents, Gary McCullough and Fran Boyd, who are heavily addicted but somewhat functioning drug addicts. Balancing out the despair of the story is Ella Thompson, a beacon of hope in the neighborhood whose motivation for doing good was inspired by a tragic loss.

DeAndre is a smart but floundering young man in dire need of guidance. However, his parent’s struggle with addiction occupies much of their time and has basically left him to fend for himself. Gary came from a stable home and was an ambitious and hardworking man before he became addicted. He is the most fitting person to help guide DeAndre through adolescence but is undependable because his gifted mind is now used for little more than thinking up hustles to obtain his next fix. Fran’s parents struggled with alcoholism and other issues that resulted in many of their children developing addictions. She’s present in DeAndre’s life and makes attempts to instill some structure but rarely follows through and sends mixed message by sometimes excusing his behavior when it’s beneficial to her.

Ella operates the local community center at which DeAndre, his friends, and some of the other kids in the neighborhood spend their free time after school. Within the confines of the center, DeAndre and his friends are asked to leave their rough language and behavior on the street in exchange for being allowed to use the basketball courts. They can leave some of their posturing behind and be somewhat normal kids while at the center. The center organizes a basketball team to allow the kids to complete in a league against other teams around the city. However, DeAndre and his friends lack the discipline to put in the necessary work during practice or to follow the sportsmanship conduct rules during games and over time the team falls apart.

As the kids get older, they start spending less time in the safety of the community center. They start hanging out more on the street away from responsible adult supervision. Youthful insecurity masked by bravado lures many of them into lifestyles with long-term repercussions. The young men who feel neglected at home begin selling drugs as a preteen pastime that gives them a sense of achievement, an opportunity to showcase their toughness, and pocket money to impress neighborhood girls. The young women who are also neglected at home relish in the attention from the neighborhood boys and misguidedly use sex in an attempt to get and keep their attention. The desire to matter to someone for even the shortest length of time leads these youths to have unprotected sex (in some cases with multiple partners) resulting in unplanned teen pregnancies.

The kids fantasize about parenthood instead of thinking about the hardships that would result from adding a child to an already precarious social and financial situation. The boys are fatalists who deep down inside have little hope that they’ll amount to much or live for very long. As a result, they view children as living proof that they existed and confirmation of their manhood. The girls see children
as a way to remain connected to their boyfriends and someone for them to love who in time would need and love them. Once the kids are born and the fathers drift away, the girls either mature quickly or step up to their responsibilities or hand off the child to relatives as they continue to search for love in the streets. The unfortunate cycle of children growing up as orphans with living parents continues.

At times there were moments where characters seemed to be on the verge of getting it together. They would make the push to suffer through the hell of withdrawal, get off drugs, start working, and regain some faith in the possibility of climbing out of their despair. But then something would happen or someone would come along and they’d fall back into their old habits. I actually felt disappointment reading about those moments and even anger at times but then the characters would offer a glimpse into the disappointment they felt in themselves and I’d end up feeling uncomfortable about my judgments.

Drug addiction and its impact on communities is a big hairy problem to solve. People are imperfect (and in some cases frustratingly so) but we rise and fall as a society so simply labeling individuals with addiction issues as degenerates to be cast aside is not a viable solution. There is a dire need for an improved and thorough understanding of addiction that is grounded in facts and a method of eradication that is focused on treatment and prevention rather than punishment. The Corner didn’t really offer any solutions or make me change all of my views but it did make me revisit and question some of my ideas about addicts and drug use.