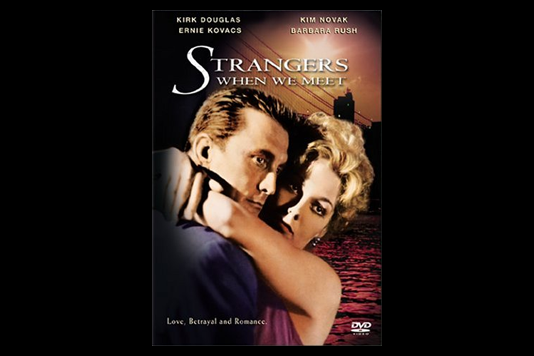 Strangers When We Meet is a movie about Larry Coe (Kirk Douglas), a married self-employed architect who has become bored with the routine and mundane aspects of his career and marriage and Margaret ‘Maggie’ Gault (Kim Novak), an unhappy suburban housewife who has moved to a new neighborhood with her family. Some excitement is added to their lives when Larry and Margaret begin an affair. In the midst of all this hubbub Larry’s skeevy neighbor Felix Anders (Walter Matthau) manages to slither into the picture and further complicate matters.

**Commentary Beyond This Point Contains Spoilers**

The content of Strangers When We Meet is rather tame by today’s standards but knowing that the movie was from the 60′s, I was a bit caught off guard by the relatively open discussion of risqué topics. There’s the “hippie, Woodstock, tree-hugging, free-love” 60′s and then the “not quite out of the 50′s” 60′s. I was surprised to see the movie actually show these two married people carrying on an affair without veiled references. Yet given the risqué (for its time) language and content, why do these married couples have twin beds? I also noticed that while Maggie and her husband’s beds are separate, Larry and his wife’s beds are pushed together. Which brings me to another observation…

There’s a bit of weirdness with Maggie’s husband Ken (John Bryant), in that while he obviously cares for Maggie, he seems to be emotionally and physically uninterested in / distant from her. Unfortunately, the movie doesn’t give Ken as much attention as the other characters so you don’t really get to learn much about him. After a scene where Maggie attempts to seduce Ken, I spent the rest of the movie wondering if there was going to be some big reveal about him. Was he devoutly religious? A homosexual? Boozing it up with prostitutes during his lunch hour? What was his deal? I think the movie would have been a bit more interesting if some of the other characters (ex: dirty Felix) were dropped and the audience was allowed to see a bit more of Ken and Larry’s wife, Eve (Barbara Rush).

It was wrong for Maggie to have an affair but I could understand why she was unhappy in her marriage. However, Larry seemed to have a good relationship with his wife or at least good communication. It was clear that he was bored with his life and decided to have an affair but the movie tried to make it seem like he was so in love with Maggie. Or maybe in a roundabout way the movie was actually showing that what he thought was a passionate never ending love was actually a short-term infatuation.

Its probably not politically correct to say but I didn’t buy Maggie’s explanation for why she decided to take sleeping pills and not double check that all of the doors were locked after some random guy that she met told her that he was on his way to her house. Maggie’s version of events just didn’t make sense. If things happened as she said they did, why was the guy still calling? It seems that while Ken was a bit weird, Maggie probably also had her own issues.

At first I thought Felix was simply an annoying nosy neighbor but he was actually shown to be a philandering busy body. I was so confused by his trying to “seduce” Eve. The scene was just so awkward, I was praying that she’d run away and call 911 because his methods for seduction seemed to actually be a precursor to sexual assault. (He was so appallingly weird.)

What did you think of Strangers When We Meet? What was Ken’s problem? How weird was Felix?

As of today, Strangers When We Meet is available via Netflix and Amazon on DVD.