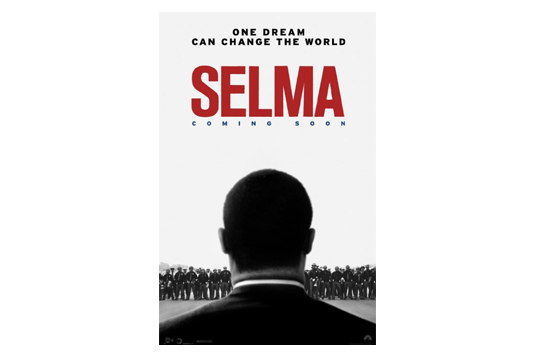 “Selma” provides a snapshot of Martin Luther King, Jr. (portrayed by David Oyelowo) and the Southern Christian Leadership Conference’s (SCLC) efforts to the end the systematic suppression of black voting and other civil rights in the South. While blacks legally had the right to vote, various forms of intimidation along with voter registration tests were used to dissuade them from exercising their right. Early in the film MLK visits Washington, DC and tries to convince President Lyndon B. Johnson (Tom Wilkinson) to pass a bill that would strike down voter registration discrimination.

There were a few ruffled feathers about the manner in which LBJ was portrayed in the film. A few former LBJ aides felt that his role in the civil rights movement was downplayed and inaccurate. LBJ wasn’t made out to be a hero but he also wasn’t the bad guy in the movie. He seemed to be concerned with the potential political ramifications of taking action against a practice that was possibly supported by some of his key constituents. He wanted to use his political capital to prioritize a war on poverty that he felt was more pressing and would have probably been more easily accepted.

MLK disagreed and felt that enforcement of black civil rights was a pressing issue that could not be delayed any longer. As a result, the S.C.L.C decides that they have to get the president’s attention and force him to act by getting on the front page of newspapers and the news at night. They decide to stage demonstrations and select the Selma Courthouse in Alabama which houses the Voter Registration Office as the perfect battleground because the County Sheriff is a hothead who will give them the drama needed to get the attention of the press and public.

In an excellent portrayal, Tim Roth enters the fray as George Wallace, Governor of Alabama. It was shocking to see that a US Governor could stand before the confederate flag and openly advocate for the preservation of racial discrimination. Wallace personifies the fiery entrenched opposition and openly hostile resistance to blacks exercising their rights.

Adding more fuel to the fire is Nigel Thatch in a brief appearance as Malcolm X. He serves as the potential militant threat beyond the gates that could become the face of the movement if MLK is removed or ignored. Malcolm X is a foil but also an unexpected ally for MLK and the SCLC. Coupled with the brutality unleashed on protestors during a night march at which MLK was absent, the situation becomes increasingly tense.

In an effort to undermine MLK’s resolve, recordings that could prove devastating to his marriage are mailed to his home. In a very moving scene, MLK and his wife, Coretta (Carmen Ejogo) discuss the difficulty of living under the constant threat of death and violence and she seeks reassurances of his love. While living under these circumstances were no doubt difficult for MLK, it made me think about the burdens and difficulties that Coretta faced as well.

MLK and the SCLC decide to organize a march from Selma to Montgomery, Alabama. In what came to be known as “Bloody Sunday”, Hosea Williams (Wendell Pierce) and John Lewis (Stephan James) led the first attempt to cross the Edmund Pettus Bridge. As they near the end of the bridge, they are met with violent resistance by state troopers and local police. The violence provides the attention the movement needs but also raises questions about if the potential rewards are worth putting protestors in situations where they might face serious harm.

I enjoyed the movie and while it wasn’t perfect, I thought it was quite good. I would consider MLK, Coretta, LBJ, and Wallace as the leads of the film and the actors in those roles all did great jobs. They were well cast from a physical perspective and were able to capture the presence of the people they were portraying.

In contrast, the supporting characters weren’t terrible but lacking detail, they ended up being good but not outstanding points of the film. For example, I didn’t know who Dylan Baker was supposed to be when he first appeared on screen and thought he was just one of LBJ’s random aides or associates. Granted, he had very little screen time and the character lacked detail so he didn’t have the presence that one would expect from someone playing a looming historical figure such as J. Edgar Hoover.

This was also true to some extent for several of the civil rights activists. Some of the prominent civil rights figures of the time were portrayed but they weren’t fleshed out. Without having some previous knowledge of Hosea Williams, Bayard Rustin, Ralph Abernathy, etc. it would be possible to watch the film and think they were just MLK’s friends or aides rather than important figures in their own right.

After watching “Selma” I left the theater wondering about the possibility of a future major motion picture about Martin Luther King, Jr. that would cover his entire life or a wider view of the major players in the Civil Rights Movement. I thought Coretta was very interesting and wanted to know more about her perspective and experience. I was curious about MLK’s relationships with the other civil rights leaders and wanted to know about what went into the planning of The March on Washington. Maybe if “Selma” generates enough attention, it might motivate others to begin planning the groundwork for more expansive films and/or an HBO quality miniseries.

I’d recommend checking out “Selma” if you’re interested in history, dramas, social / civil issues, or the Civil Rights Movement. 2015 will mark the 50th anniversary of the Selma to Montgomery marches and the Voters Rights Act of 1965. In light of recent events and the Supreme Court voting to amend sections of the Voters Rights Act the movie felt especially relevant to modern times. I was motivated to add a few books about the Civil Rights Era to my reading list with hopes to learn more about the movement and the people that were involved.