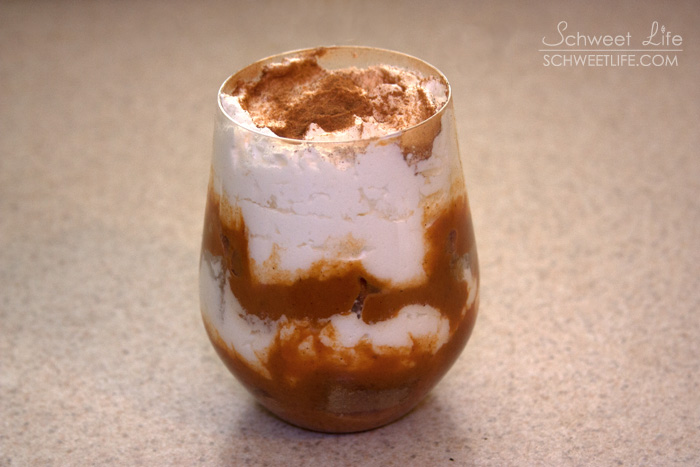 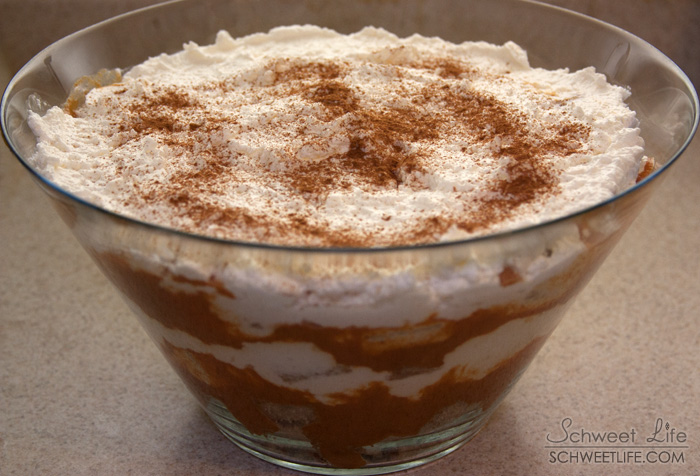 There’s an episode of Friends (oh, how I loved that show) where Rachel (who was my favorite character) decides that she’d like to contribute to Thanksgiving dinner by making a trifle. Unfortunately, the pages of her cookbook get stuck together and she combines the ingredients of a dessert trifle and shepherd’s pie. Nasty stuff but I was intrigued.

I researched trifles and found that while they are fancy looking desserts, they’re easy to make and can be assembled from a variety of ingredients. I decided to make a fall/winter themed trifle for the holidays and put together this recipe for a pumpkin trifle.

In a bowl, combine the pumpkin puree, milk, cinnamon, ginger powder, and vanilla. When the pumpkin mixture is well combined, add the package of vanilla pudding and stir to mix everything together. Taste the pumpkin pudding and if needed, add sugar to taste. Cover and refrigerate until you’re ready to assemble the trifle.

Using a cake stand or hand mixer, whip together the sugar and butter until it becomes light and creamy. Next, whisk in the eggs one at a time and add the vanilla extract.

Add the salt to the flour and working in batches, mix the flour into the wet ingredients. Be sure to scrape down the sides of the bowl so everything is well incorporated.

The use of whole wheat flour will make the batter a bit dry but you want to avoid making the batter too thin by adding all of the milk at once. Instead, continue gently mixing the batter while slowly adding the milk until the mixture reaches the consistency of cake batter.

Pour the batter into a greased sheet pan and bake in a pre-heated 350 degree oven until a toothpick inserted in the middle comes out clean. Allow the cake to cool completely before cutting it into one inch cubes.

Pour the cold cream into a bowl and whip vigorously until it begins to thicken. You can add sugar if you’d like when soft peaks begin to form. Continue whipping until stiff peaks form.

Cover the dish with plastic wrap and place in the fridge for at least 6 – 24 hours. The cake is mild in flavor and might be a little dry but the flavors and textures really balance out if the trifle has a chance to sit which should allow the cake to absorb flavor and moisture from the pumpkin pudding.

You can assemble one large family style trifle (see above) or use glasses / bowls for fancier individual trifles.