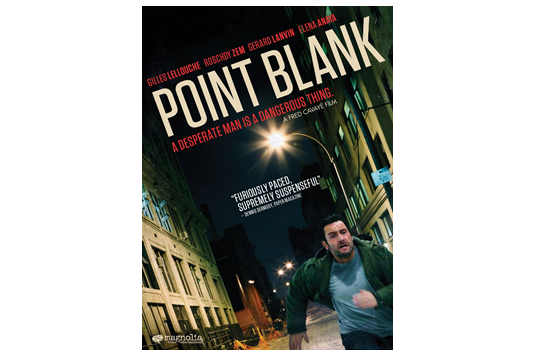 Note that this is a French film with English subtitles.

Samuel Pierret (Gilles Lellouche), a nurse and his wife Nadia (Elena Anaya) are a month away from the birth of their first child. Early in the movie they learn that there are some concerns about the pregnancy and Nadia is put on bed rest. Meanwhile, a thief by the name of Hugo Sartet (Roschdy Zem) has been brought into the hospital where Samuel works after what’s believed to have simply been a motorcycle accident.

Unbeknownst to the hospital staff and police, Hugo was actually hit by a motorcycle while fleeing two men who were trying to kill him. When one of the men visits the hospital to try to finish off Hugo, Samuel steps in and saves Hugo’s life. Unfortunately, Samuel’s wife is kidnapped and he’s instructed by one of Hugo’s allies to help get Hugo out of the hospital if he ever wants to see his wife again. And we’re off!

The action begins while the opening credits are still rolling and never lets up until the end of the movie. There’s some violence but it’s not overdone and isn’t used to make up for the lack of an entertaining story. Samuel is really just an innocent bystander who has been drawn into a web of drama between criminals as a result of doing the right thing at the wrong time for the wrong person. The manner in which he helps Hugo escape combined with a run-in with a police squad results in him being implicated as Hugo’s accomplice and it forces him to take matters into his own hands. The basic overall theme of the flick is nothing new but the movie does a good job of avoiding clichés.

There are twists and turns and some people aren’t quite who they seem to be. The acting and cinematography are good and more importantly, while Samuel and Hugo face challenges they aren’t given the easy way out by being borderline invincible superheroes. Instead they are made to think on their feet to avoid capture and remain alive. There’s no comedic side-kick or ridiculous pauses for romance and exclamations of love, instead the movie just continues moving along briskly.

You can view the trailer via the Hulu clip below. As of today, the movie is available on Netflix and Amazon.