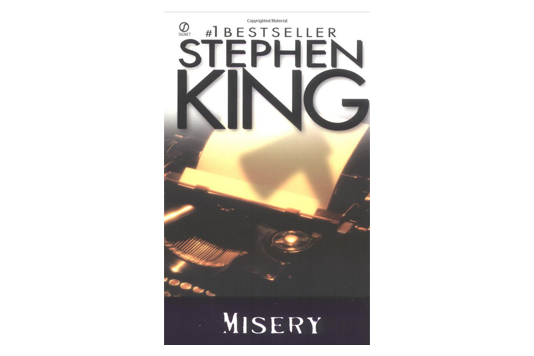 Happy New Year! I apologize for not updating the blog in almost a year. I had several life events in 2014 and just didn’t have the extra time / energy to also keep up with writing for the blog. Things still haven’t completely settled down as yet but I’m hoping to be able to post once per week or every other week.

I happened to be at the library one day and saw a DVD copy of “Misery”. I’d watched a few movies based on Steven King’s novels in the past and found that they were hit or miss. I decided to give the movie a shot when I read the back cover and learned that Kathy Bates’ portrayal of Annie Wilkes was her breakout role. I settled in to watch the movie with no expectations and found it to be exciting and absolutely thrilling. I recommended the movie to a few co-workers and they all enjoyed it as well.

Last year, I was at the library again and saw a paperback copy of “Misery”. I’ve read and watched books and their movie adaptations and have found that if the movie is good, the book tends to be even better because it typically has more detail. This theory held true for “Misery”. The movie was great and is definitely worth watching but the book was downright amazing.

Paul Sheldon is a famous author who has written a series of romance novels featuring a character named Misery Chastain. The series is very successful but the books are vapid and Paul would like to focus on writing something more challenging. As the release of what he plans to be the last installment of the “Misery” series nears, he takes a trip to Colorado and gets caught in a blizzard that flips his car and leaves him with two broken legs and a dislocated shoulder.

Annie Wilkes, who happens to be a huge fan of the “Misery” series lives on a nearby farm and finds Paul and his wrecked car. She takes Paul to her house and uses her skills as a former nurse to nurse him back to health. She places him in her guest room and visits him throughout the day to administer medication, bring him food, etc. Unfortunately for Paul, Annie lives alone in the middle of nowhere and is batshit insane.

Annie has unpredictable mood swings that cause her to go from being sweet and caring to psychologically abusive with no provocation or warning. She ups the ante on crazy when she obtains a copy of the latest “Misery” novel and learns that Paul has killed off Misery Chastain, her favorite character. She demands that Paul write a new book just for her featuring Misery’s return from the dead. And so begins a series of events reminiscent of Arabian Nights but the threat of violence for Paul is no longer just a threat and has become a terrifying reality.

The circumstances that lead to Paul and Annie meeting are pretty convenient. However, putting aside the initial meeting, other events don’t just neatly work out and fall into place. That’s part of what makes the book so exciting. Because things don’t always just happen to work out in Paul’s favor (they actually go really wrong), you feel the precariousness of his situation. Honestly, Paul sounds like a bit of a jerk but you sympathize and cheer him on because the odds are so heavily stacked against him. A large part of the book’s charm is not knowing what will happen next and feeling the mounting tension as Annie becomes more and more unhinged.

I highly recommend “Misery” if you’re a fan of thrillers that keep you on the edge of your seat. If you’re feeling extra brave, read the book when you’re home alone, especially at night.