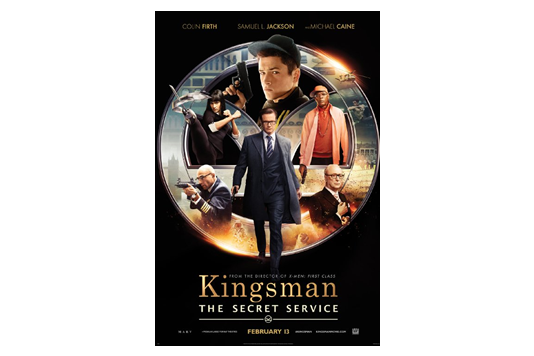 Kingsman: The Secret Service is a send-up of classic spy and espionage movies complete with the suave agent, cool gadgets, and a super villain with a slightly ridiculous plan to take over the world. There’s action and comedy from start to finish and the special effects during fight scenes make them even more enjoyable.

The Kingsmen is an independent international secret spy agency that was formed after WWI with the aim of preserving world peace. The entrance to agency headquarters is located in a Saville Row tailor shop that boasts spiffy suits in its front window and an array of cool hidden rooms accessed via its dressing rooms. Agency headquarters are located outside of the city in a large mansion with expansive grounds and an impressive underground car and plane garage.

The film’s hero Eggsy (Taron Egerton) is a young rough around the edges bloke with quite a bit of potential and something to prove. His father was killed when he was a boy and he’s now stuck putting up with his mother’s abusive boyfriend. After a run-in with the police, Eggsy is taken under the wing of experienced agent Harry Hart (Colin Firth) who schools him in the art of gentlemanly spy behavior with the help of Merlin (Mark Strong), an M of sorts who oversees the agency. To become a Kingsman, Eggsy must first train and compete against other potential recruits in a series of exercises aimed at testing their physical abilities and characters.

The film’s super villain Richmond Valentine (Samuel L. Jackson) is a billionaire with a sneaky plot to save the world from global warming by culling its human population. Valentine bears a striking resemblance to Russell Simmons in dress, eccentrics, and lisp. His company has devised a SIM card that allows its owners to access the internet for free and can also be used as a mind control agent. This is quite funny considering Russell Simmons’ questionable RushCard. Valentine’s chief minion is the ironically named Gazelle (Sofia Boutella), an amazingly agile assassin with blades and spikes in place of her lower legs.

Valentine’s evil plan unfolds as Eggsy moves through the phases of the Kingsman spy competition. Things come to a head in an ultra-violent fight to the death at a Westboro Baptist type church. Eggsy and his new associates are called upon to step in and save the world. When the going gets tough, he receives inspiration from the promise of an unexpected reward.

I’m a woman and probably not the target audience for Kingsman but it was still very easy to get into the fun of this film. At some point in the movie I thought about how cool it would be to get a sharp bespoke suit, become skilled in weaponry and hand to hand combat, live in London, and be a spy. Or at the very least I’d like to dress fancily.

Kingsman probably won’t be nominated for any Oscars but it’s a fun movie. I’d recommend this film for people who are into spy flicks or comedies. However, there’s quite a bit of violence and sexual content so it’s probably not acceptable for kids and young teens.