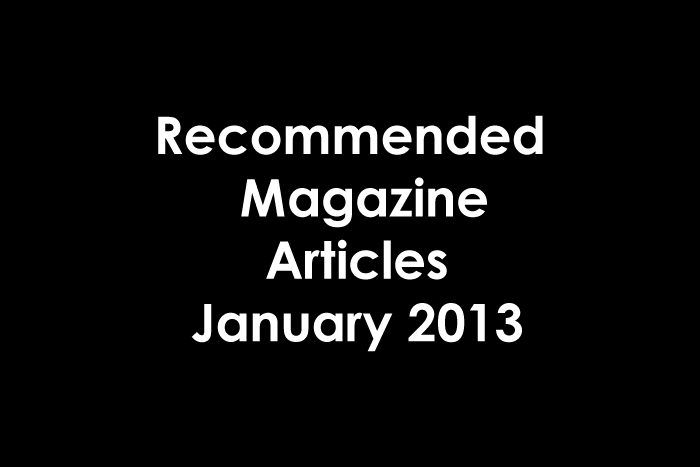 I like magazines and through a series of perfectly timed promotions managed to get get great discounts on subscriptions to quite a few over the years. I’ve subscribed to Inc., Wired, and Bon Appetit for about 7, 4, and 2 years respectively. I recently replaced my subscriptions to some other magazines with subscriptions to Cooking Light, Popular Mechanics, Money, and Kiplinger Personal Finance.

Sometimes I read articles that are really interesting and would like to share them with others but either forget where I read the article or I can’t loan the person my physical copy. As a result, I’ve decided to start jotting down brief notes about articles that I’ve read and liked along with links to their online versions for convenient referrals to others.

John McAfee is either crazy or going through the worst mid-life crisis ever. At least, that’s I what I gathered from the “John McAfee’s Last Stand” article. I won’t even attempt to recount the details of McAfee’s past and the events that led up to him being wanted as a possible murder suspect. The story has already been written, should be made into a movie, and is a must read.

“Early Warning System” is an interesting article about a new prenatal blood test that could be used to detect and diagnose genetic defects more safely, accurately, and earlier in pregnancies.

“The BA 25” features tips from Bon Appetit on things to eat, drink, cook, or check out in 2013. I’m picky about sandwiches and burgers but the Cemitas that was featured looked extremely good. It’s a Mexican sandwich featuring pork butt, avocado, Oaxacan cheese, peppers, and herbs stacked high on a sesame seed bun.

The “BA Cooking School” section at the back of each issue of Bon Appetit includes tips for preparing some of the dishes that are featured in that issue of the magazine. Topics might include carving a turkey, identifying ripe pineapples, making chocolate sauce, etc. This issue was a bit different because the feature article, “How To Cook Right Now” was pretty much an expanded version of the cooking school section. The feature was separated into eight lessons, six of which included recipes. My favorite sections were about pan-roasting, braising, and desserts. I definitely plan on trying the Soy-Braised Short Ribs with Shiitakes recipe.

The feature article “2013 Chicken Hot List”, showcases eight types of meals, each with one main chicken recipe that can be altered to create a few other dishes. In addition to a few of the recipes in the feature article, I’d also like to try making the Spicy Shrimp Noodle Soup, Stir-Fried Lemongrass Chicken, and Veggie and Tofu Stir-Fry recipes.

Would you describe yourself as being paranoid? Normally my answer would be a “no” but after finishing “In The Digital Crosshairs”, I’m not so sure. The article covers the various ways that personal information can be collected via the internet, databases, devices, etc and accessed by pranksters, hackers, companies, government agencies, etc. However, you can breathe a bit easy, there are also a few tips for thwarting digital snoops.