Homicide: A Year on the Killing Streets by David Simon 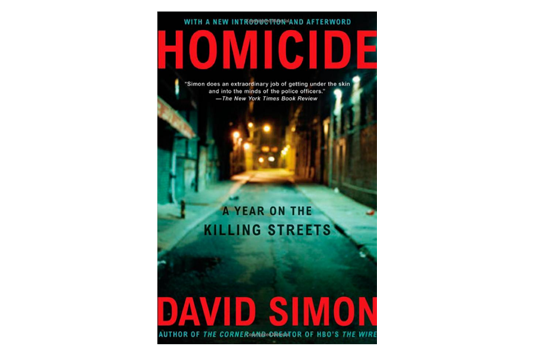 Click the image above or the link to purchase Homicide: A Year on the Killing Streets on Amazon.

Homicide: A Year on the Killing Streets chronicles the year David Simon spent shadowing a shift of the Baltimore Police Department’s homicide unit. Covering 1988, the book was written after Simon had spent four years as a journalist covering the local crime beat for The Baltimore Sun.

I’d set aside time and made plans to write this review on several occasions but could never quite get my thoughts and words together. To be honest, I had a feeling of ambivalence towards saying that Homicide is a good book. Homicide is pretty much about the investigation of deaths, murders, assaults, and other serious acts of violence over the course of a year. The factual accounting of crimes combined with dark humor and good storytelling made it very easy to lose myself in the story. And then I’d remember that these weren’t just creative stories that a gifted writer had simply made up. These stories that I found entertaining were actually real accounts of the violent end of a human being’s life.

Simon gave a peek behind the curtain of various facets of Baltimore’s justice system including the police department, emergency rooms, city morgue, courthouses, and jails. It helped to provide a well rounded perspective of how employees of these different entities work together to guide cases from crime scene through prosecution. It also offered insight into how the structure, red tape, and politics of these organizations combined with the city’s history and changing population contributed to some aspects of the city’s decline.

Excluding those who were lead detectives on the book’s major cases, I had a bit of a hard time keeping the different detectives straight. Yet they were all fairly likable and their hijinks, office pranks, and gallows humor helped to break up the book’s tension and sadness. The reasoning and thought process of a few suspects and witnesses were also nonsensical and off base to the point of being amusing.

The homicide unit was called upon to investigate murders, questionable deaths, and violent crimes. A few deaths that initially seemed to be questionable were eventually cleared of foul play. Some murders and violent crimes were solved fairly quickly while others dragged on for months and in some cases were never solved or the conviction of identified suspects would be hit or miss. While all of the cases were equally important the ones that I remembered long after reading the book had an interesting aspect or involved children.

There was the case of a black widow who seemed to be willing to kill anyone around her to collect on insurance policies. Interestingly enough, nobody became suspicious until she tried to kill someone a few too many times. The investigation led to an inappropriately hilarious series of events that revealed things were amiss at a local cemetery.

There was a female taxi driver who was sexually assaulted and murdered after being robbed. It was enough of a crime for her to be robbed but she lost her life as the result of one robber being a stone cold murderer. And she was sexually assaulted because the other robber was a complete moron with a flawed sense of logic regarding boundaries and appropriate sexual conduct.

Two cases involving police officers juxtaposed the department’s and officers’ dedication to solving cases where officers are victims versus cases where they might be potentials suspects.

Patrolman Gene Cassidy was shot twice in the head by a man he was attempting to arrest on an outstanding assault warrant. The shooting left the young patrolman without the ability to see, taste, or smell. Officers rallied around Cassidy and there was a great deal of effort put into finding and prosecuting the suspect.

John Randolph Scott was a car thief who was fatally shot in the back while attempting to run from police officers. The service weapons belonging to the officers at the scene didn’t match the murder weapon and they avoided cooperating with the investigation. The homicide detective that was assigned the murder was met with hostility and regarded as a bit of a traitor for attempting to actually follow through on investigating fellow officers.

Many of the cases were sad but the most heartbreaking were those that involved children. Dark humor could not be found in those cases and the underlying anger, sadness, and frustration of investigating these kinds of crimes pushed through to the surface.

Michael Shaw was a two-year-old boy who was sodomized and beaten to death by his mother’s boyfriend. His mother’s seeming disregard of his death and preoccupation with defending her boyfriend was infuriating to the point of being sickening.

Latonya Wallace was an eleven-year old girl who was reported missing by her family when she didn’t return home from an afterschool trip to the library. Her body was found two days later just a few blocks away from home in an alley behind the backyards of a stretch of row houses. The case was investigated for almost the entire length of the book and helped to tie it together. Reading about the case unfolding over the course of several months showed how an investigation being designated a high priority case could be a gift and a curse.

I’ve watched and read a lot of true crime tv shows and news articles and they tend to focus on the suspects and investigators. Homicide also focused on those two perspectives but right when you’d get comfortable, there would be a little something that would give the victim a voice and remind you that they were a person before their death. And in that moment the true heinous nature of one human being taking the life of another would strike you.

Homicide is an equally unsettling and engrossing book that touches on a variety of topics and range of emotions. A silver lining (in a book that certainly needed one) was that one of the most unsettling crimes motivated a mother to ease the grief of losing her child by providing a haven for children that might keep them safe and guide them away from the violence that plagued the streets of Baltimore.