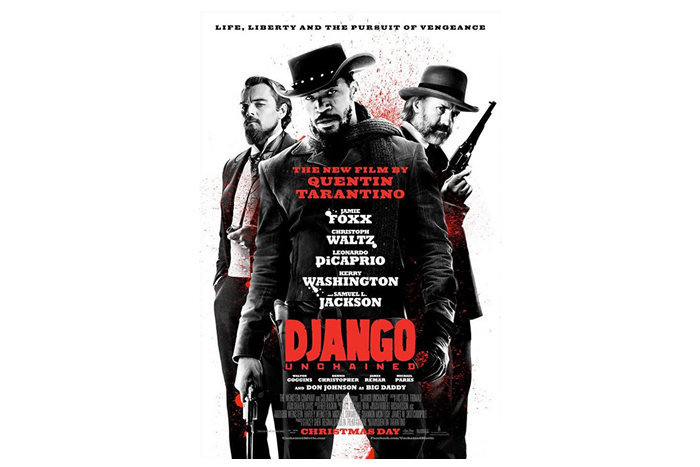 You can listen to the smooth stylings of my voice by playing the YouTube video or read the text and do the voices in your head. The choice is totally up to you.

“Django Unchained” is a movie set two years before the Civil War that tells the story of a slave named Django (Jamie Foxx) who in exchange for the promise of his freedom agrees to help Dr. King Schultz (Christoph Waltz), a former dentist turned bounty hunter identify and hunt down a trio of wanted criminals known as The Brittle Brothers.

To avoid arousing suspicion, Django pretends to be a free man and excited at the seemingly small but actually significant opportunity to choose his own clothes, selects a blue suit, white ruffle shirt, and white stockings (imagine a cross between the “Seinfeld Pirate blouse” and Prince’s shirts v. blouses outfit from The Dave Chappelle Show skit). The duo’s arrival at Big Daddy’s (Don Johnson) plantation results in a gun-slinging showdown with The Brittle Brothers and a slapstick nighttime Klan-like meeting.

The newly freed (and more tastefully attired) Django and Dr. Schultz decide to team up in the pursuit of other bounties while coming up with a plan to find and rescue Django’s wife, Broomhilda (Kerry Washington) from slavery. And therein lies the problem with the movie. Tarantino handles the bounty hunting portion of the film masterfully but loses some of his mojo when the movie’s attention is shifted away from bounty hunting towards the rescue of Broomhilda.

Throughout much of the film Broomhilda is only seen through a series of flashbacks that do little more than portray her as a plot device clumsily devised in an attempt to explain Django’s want of vengeance. Broomhilda being Django’s wife (though not legally recognized in those times) and the two being separated by the injustice of slavery is more than enough justification for explaining why he’d want to be rescue her. Yet instead of reasonably fleshing out the character and showing her as a human being, Tarantino seemingly says to the audience “I’m going to punch her in the face repeatedly so you don’t forget that this movie is about slavery and slavery is bad.” Way to go Capt. Obvious.

Django and Dr. Shultz, find out that Broomhilda has been sold to Calvin Candie (Leonardo DiCaprio), owner of a large Mississippi plantation and an avid fan of the bloody sport of Mandingo fighting which the duo decide to use as part of their arguably overly complicated ploy to rescue Broomhilda. Candie is fittingly introduced as he is watching and encouraging the brutality of a Mandingo fight in the surroundings of a fancy club. The setup is a spot-on representation of both Candie and slavery in the South, a false genteel veneer that masks cruelty and inhumanity.

While Candie is obviously supposed to be the villain that the audience hates, I thought he was quickly overshadowed by Stephen (Samuel L. Jackson) the busybody house slave. Every time Stephen would interrupt or utter some bit of nonsense I would hope that one of the other characters would either karate chop him in the throat or kick away his cane. Annoying? Aggravating? Those terms do not begin to describe Stephen. He’s that kid your parents made you be nice to and play with who would tattle about every and anything but he’s grown up to be a cold-hearted and miserable old man that nobody visits because he was always such a jerk. Stephen is that character you love to hate and he was the bright spot in the last 30 to 45 minutes of the movie as it descended into overdone cartoonish violence.

I had high hopes for the movie and it could have been perfect if Tarantino had fully developed the characters and the story instead of relying so heavily on gimmicks (people do not explode into alien goo when shot). Overall, the movie was more good than bad and I enjoyed “Django Unchained”.