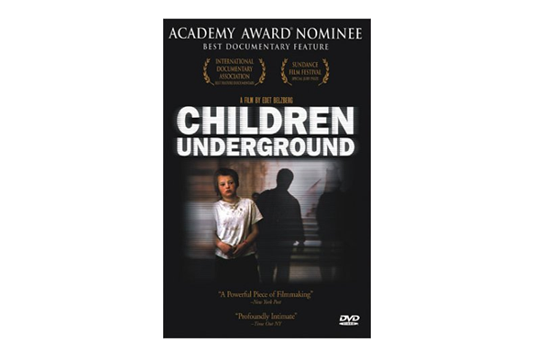 I like documentaries but sometimes I’m not quite sure of what to make of how I feel about them.

Documentaries with topics that are discussed from a distant and non-emotional perspective are easy to assess from a logical standpoint. However, when a documentary zooms in on specific individuals, families, communities, etc it suddenly becomes a lot more personal. Depending on the filmmakers’ approach, the narrow focus could result in the experiences of those individuals being felt more acutely or there can be a feeling of unease as a result of knowing that the plight and suffering of another human being is being displayed for your entertainment. My feelings straddled the fence a between those two points while watching Children Underground.

Children Underground follows the lives of a group of children and teens living on the streets of Bucharest, Romania. The lead-in to the documentary proposes the idea that this group and many other children like them are homeless and face hardships because of the pro-life and anti-contraceptive policies of the country’s failed communist regime. I am not at all familiar with the history of Romania so the causes that are proposed as having led to this large population of homeless youths may or may not be valid. However, the documentary does a terrible job of explaining this argument let alone proving it. The details vary but based on what is shown in the documentary the reasons for these children running away from home aren’t very different from the reasons children in other countries run away from home (the USA included).

Its heartbreaking to see these young kids who have experienced physical (and possibly sexual) abuse and are now struggling with hunger, drug addition, and the other hardships of living on the street. We’re able to learn a bit more about the backgrounds of the younger children because while they ran away from home, its recent enough that they’re still at least distantly connected to their parents. The younger children still have quite a bit of their innocence and you can’t help but hope that they’re saved before being completely consumed by the streets like the older children.

I think my conflict of feelings was a result of caring for the kids in the movie but disliking the way the filmmakers presented the film and their seeming lack of interaction with the children. I understand that documentary filmmakers probably don’t intervene when events are taking place to maintain authenticity. However, there are some scenes where the maintenance of this distance seemed unreasonable and unbelievable for a human being. For example, I personally don’t understand how the crew stood by and watched while an admittedly intoxicated and disturbed child was kicked and beaten by a grown man for making noise near his shop. The distance in that scene seemed to convey a feeling of “yeah, this stuff happens all the time…oh well, let’s move on”. The film would have greatly benefited from having someone on-camera to ask the kids questions and walk around/interact with them.

Children Underground was nominated for an Academy Award but while the subject was moving and I certainly felt for the kids, overall the documentary seemed slightly above mediocre. I still recommend Children Underground and think it’s fine for watching once but has no replay value. If you’re interested, you should probably rent it before buying.