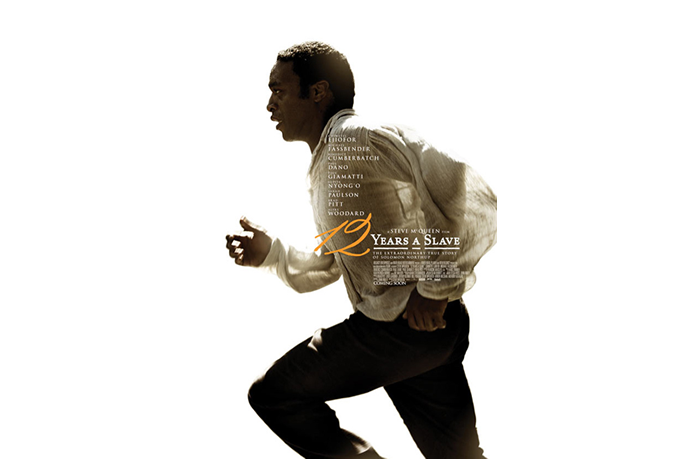 Solomon Northup (Chiwetel Ejiofor) is a freeman working as a violinist, happily living with his wife and two children in Saratoga Springs, NY in 1841. While his family is out of town on a trip he is introduced to two men that invite him on a trip to Washington, DC under the premise of an opportunity to earn a good deal of money for a short stint as a violinist in the circus.

During a night out, Northup is drugged by the men and loses consciousness only to awake shackled in a small dark room. You connect with Northup and in that moment the movie grabs hold of you and doesn’t let go until the end. We witness the theft of Northup’s freedom and his initiation into slavery as he goes through the forced transformation of becoming “Platt”, the slave.

While being shipped downriver to New Orleans, Northup finds himself seated between two other slaves that have differing views on the best way to deal with their circumstances. One suggests that they fight even with the possible risk of losing their lives because when they reach their destination they’d wish they were dead anyway. The other suggests that keeping their heads down and going with the flow is the only way to survive. Northup sees both men follow their own paths and achieve their goals but settles on his own path which he sees as the only possible way back to happiness.

Following the heartbreaking events of a “genteel” slave auction organized by an abominable slave trader, Northup is purchased by his first master: Ford (Benedict Cumberbatch). In all other ways Ford seems to be a decent man but he is still a slave owner. I couldn’t help but wonder if in all other ways, a man or woman is decent but they can find it within themselves to enslave another human being, one could only imagine the excuses they’d have to develop to rationalize the contradiction to themselves.

While Ford is master of the plantation, his overseer Tibeats (Paul Dano) manages the slaves on a day-to-day basis. Unfortunately, Tibeats is an insecure young man that is threatened by Northup, hates the very air he breathes, and finds excuses to nitpick and bully him. During a run-in with Tibeats, Northup finds himself in a situation where his life is hanging by a thread and while the other slaves are moving about and aware of his circumstances, they continue on like normal either out of fear that they might face a similar fate for intervening or as a result of being desensitized to brutality. Yet in that moment someone steps forward and offers a small token of humanity that given the risk of punishment and what it means to Northup is a merciful act of bravery. As a result of this incident Northup comes to be viewed as a dangerous slave and is sold to another master who is known for his ability to “manage” such slaves.

Edwin Epps (Michael Fassbender), Northup’s new master is a sociopath prone to random mood swings between calm weirdness and raging madness. Some of this craziness is focused on Northup but it also shines its evil on a young slave girl named Patsy (Lupita Nyong’o). While Epps views his slaves as being less than human, for some untold reason he is absolutely obsessed with Patsy much to the chagrin of his equally unstable wife. Patsy’s age is never clearly stated but there are some clues that she is rather young which makes her story even more unsettling.

To be clear, I hated Epps because he was evil but words can’t begin to describe how I felt about his wife. She was a woman looking at another woman who was in no position to resist her husband’s advances yet instead of taking out her anger on her husband she focused her rage on Patsy. I found myself hoping that Epps would work himself into a rage, have a heart attack, drop dead and through some means of divine intervention he’d take his wife with him. At the same time I was open to the idea of Patsy dying because her situation just seemed utterly hopeless and it would have been putting her out of her misery. It was weird to find myself wishing someone dead as an act of vengeance but also wishing someone dead as an act of mercy.

There are several instances of yin and yang / the light and the dark throughout the movie where the contrasts of opposites define each other. For example, there’s a scene where Northup is taken by Epps from the darkness and relative safety of the slave cabin out into the yard. Northup’s life once again hangs in the balance as he is surrounded by darkness with the only light ironically coming from Epps’ lantern as he is menacingly interrogated. Northup isn’t safe until the light of Epps’ lantern is gone and he’s once again in darkness. There is another situation where Epps has Northup punish Patsy. The punishment delivered by Northup is violent and terrible in it’s own right but things becomes even more unsettling when Epps takes over and the audience’s literal and symbolic view of the situation changes as well.

The loss of hope eliminates the ability to cope which is shown as being necessary for survival. Northup’s longing for his family made him miserable but the thought of returning to them kept him going and helped him to survive. While I was happy for the way things turned out for Northup, my heart broke at the thought of what might have happened to Patsy given that it seemed she’d lost hope and was only living because she was afraid of dying.

12 Years a Slave is at its core a movie about desperation, hope, coping, and survival and the tight rope act of Northup trying to balance all of these things under the enormous pressure of the social rules of slavery. It can also be viewed as an exploration of the dichotomy of the inhumanity of humanity. While it’s a good and thought provoking movie, it’s unfortunately based on true events that were recounted in a memoir of the same name by the real Solomon Northup.

Ejiofor’s eyes express more emotion than words ever could and add so much to the telling of Northup’s story. Nyong’o is a newcomer but she gives a heartbreaking brilliant performance that portrays the suffocating difficulty of her situation. The movie is filled with several other exceptional performances and I’m sure there will be other great movies as we move into award season but I definitely think nominations for the movie, Chiwetel Ejiofor (Leading), and Lupita Nyong’o (Leading or Supporting) would be well deserved.