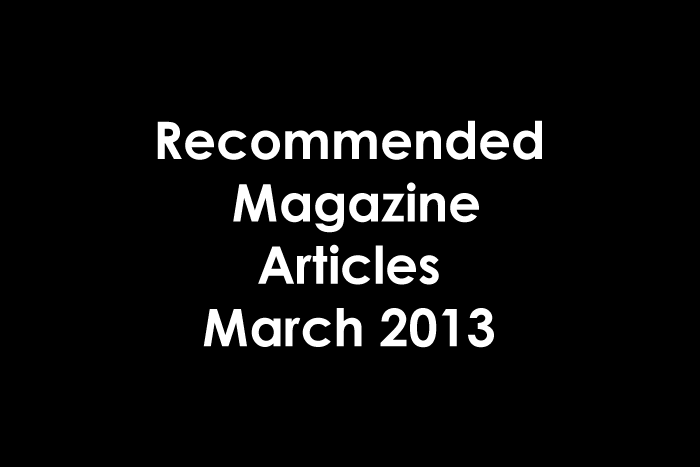 I finished reading my March magazines a few weeks ago but became quite busy and just didn’t have the time to write a blog post. I’m about half-way through my April magazines so hopefully I’ll be to get that post up as soon as the articles are available online.

Living in NYC, a car is typically more of a luxury than a necessity and sky-high gas prices really make me grateful for public transportation. “One Troubled Rig and the Future of Arctic Oil Drilling” shines a light on the increasing difficulty of obtaining oil and the risks that drilling in natural reserves could pose for the surrounding environment should things go wrong.

I knew that robots were already being used to distribute medication at hospitals but I had no idea they are being used in operating rooms. “The Robotic Doctor is In” does a good job of explaining the benefits of matching a human surgeon’s knowledge with the precise movements of a surgery robot but the machines still look absolutely terrifying.

As the world becomes increasingly connected and the far corners of the globe inch closer, it presents a lot of opportunities for international business / trade. However, “When In China” provides a learning experience for any company that is considering doing business in other parts of the world without adequate knowledge of local business practices.

I remember seeing ads for the Bodies exhibit around the city and thought it might be interesting to see but never got around to actually visiting the exhibit. “The Plastinarium of Dr. von Hagens” provided a behind the scenes view of the man who developed the concept for the original Body Worlds exhibit. The article tells the story of how he first became interested in collecting and preserving bodies, his life at present, and plans for his remains after his passing.